Last July 7, Health Care Without Harm (HCWH)-Asia’s Healthy Energy Initiative participated in a roundtable forum on the intersection of climate change, energy, and public health co-hosted by the British Embassy in Manila and Philippine Department of Health (DOH).

Entitled “Opening the Human Security Lens to Climate Change and Energy,” the event aimed to launch a conversation and create synergies between the health, energy, and environment sectors to define urgent and collaborative actions needed to address climate change’s impact on public health. The forum was attended by representatives from both government and non-government sectors, including the World Health Organization (WHO), Department of Energy (DoE), Department of Environment and Natural Resources (DENR), Climate Change Commission (CCC), European Union, and the Philippine Senate, as well as private companies from the energy sector and other health and environment organizations.

In his opening remarks, British Embassy’s Charges d’Affaires Steph Lysaght lamented the world’s obsession with short-term gains that impedes us from thinking long-term and acting on climate change. “I think the issue of climate change is fundamentally about the misunderstanding of costs. We prioritize short-term costs but we misunderstand the longer-term costs that we will have to pay.” 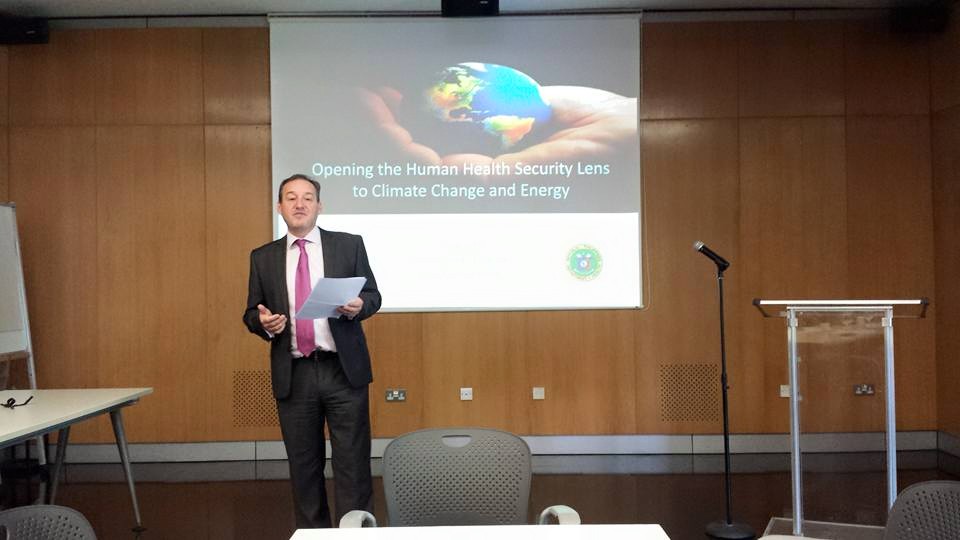 The Embassy also took the opportunity to inform the audience about the report of the British medical journal The Lancet’s Commission on Health and Climate, which was published in June this year. The Lancet, which in 2009 called climate change “the biggest global health threat of the 21st century,” this time concluded that tackling climate change could be the “greatest health opportunity of the 21st century.” It also which warned that the effects of climate change could reverse the significant progress in global public health achieved over the last 50 years.

“Achieving a decarbonised global economy and securing the public health benefits it offers is no longer primarily a technical or economic question—it is now a political one,” emphasized the 2015 Lancet Commission.

In his presentation, Dr. Renzo Guinto, HCWH-Asia’s Healthy Energy Initiative Campaigner, discussed why the health sector needs to be engaged in addressing the climate-energy nexus. "The health sector has a leading role in the decarbonisation and defossilization of the global economy. We cannot turn away from this responsibility – Hippocrates even exhorted us to 'First, do no harm.' This commandment applies to both the care of the patient and the protection of the planet." 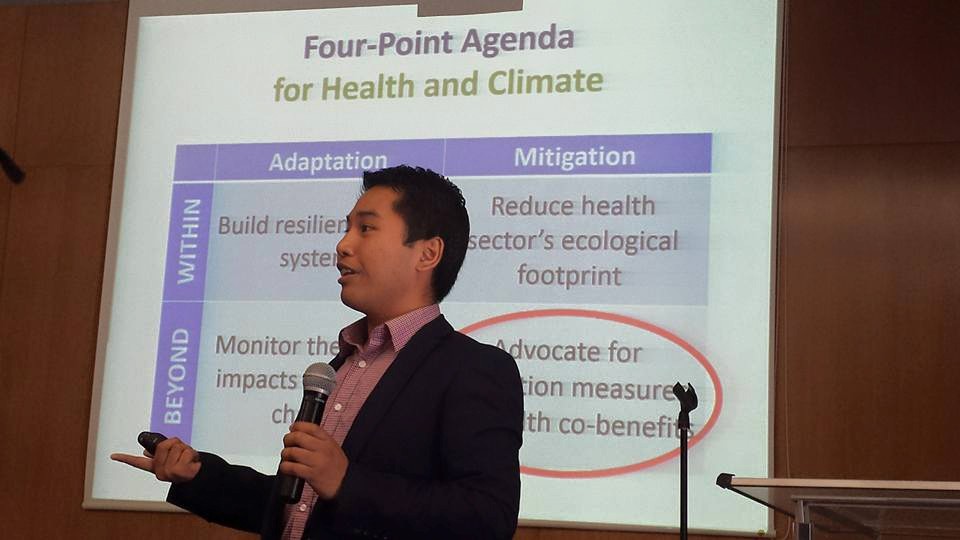 Asked on what the health sector can do, Dr. Guinto laid down a clear framework for action: “In terms of adapting to anticipated health impacts of climate change, building resilience within the health sector is critical – from ensuring that health services are not disrupted in times of disaster to setting up surveillance systems for monitoring climate-sensitive diseases.”

“On the other hand, the health sector also has a vital part in preventing further climate change through sustainable design of hospitals and other health facilities, green purchasing of food, pharmaceuticals, and other life-saving commodities, and advocating for healthier, more climate-friendly renewable energy with the evidence that we have. That is our role in the climate mitigation side,” added Dr. Guinto.

The public health lens was very much welcomed by participants from the environment and energy sectors. “It is vital that we highlight the public health co-benefits of climate mitigation options such as shifting to renewable energy alternatives,” said Assistant Secretary Joyceline Goco of the Climate Change Commission, who gave a presentation about the Philippines’ Intended Nationally Determined Contributions (INDC) to further intensify global climate change mitigation and adaptation efforts. 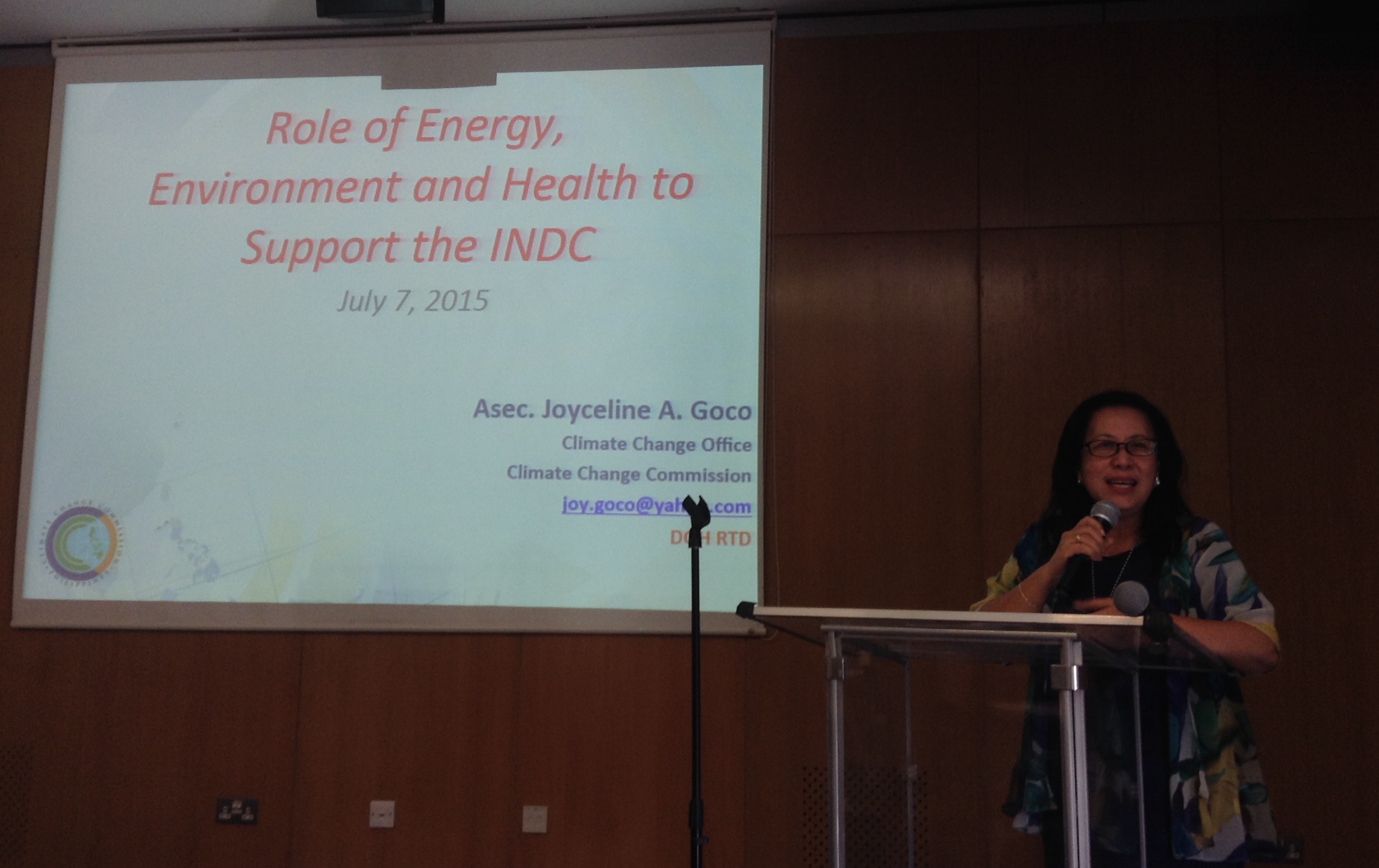 At the end of the forum, the DOH committed to strengthen efforts in policy, advocacy, forging partnerships, and evidence generation for climate, energy, and health. “The good news is that clear health benefits are immediately available – from low-carbon strategies that today could result in cleaner air to more active transport options that can improve physical fitness – ultimately averting disease and saving lives,” remarked DOH Assistant Secretary Paulyn Jean Roselle-Ubial. 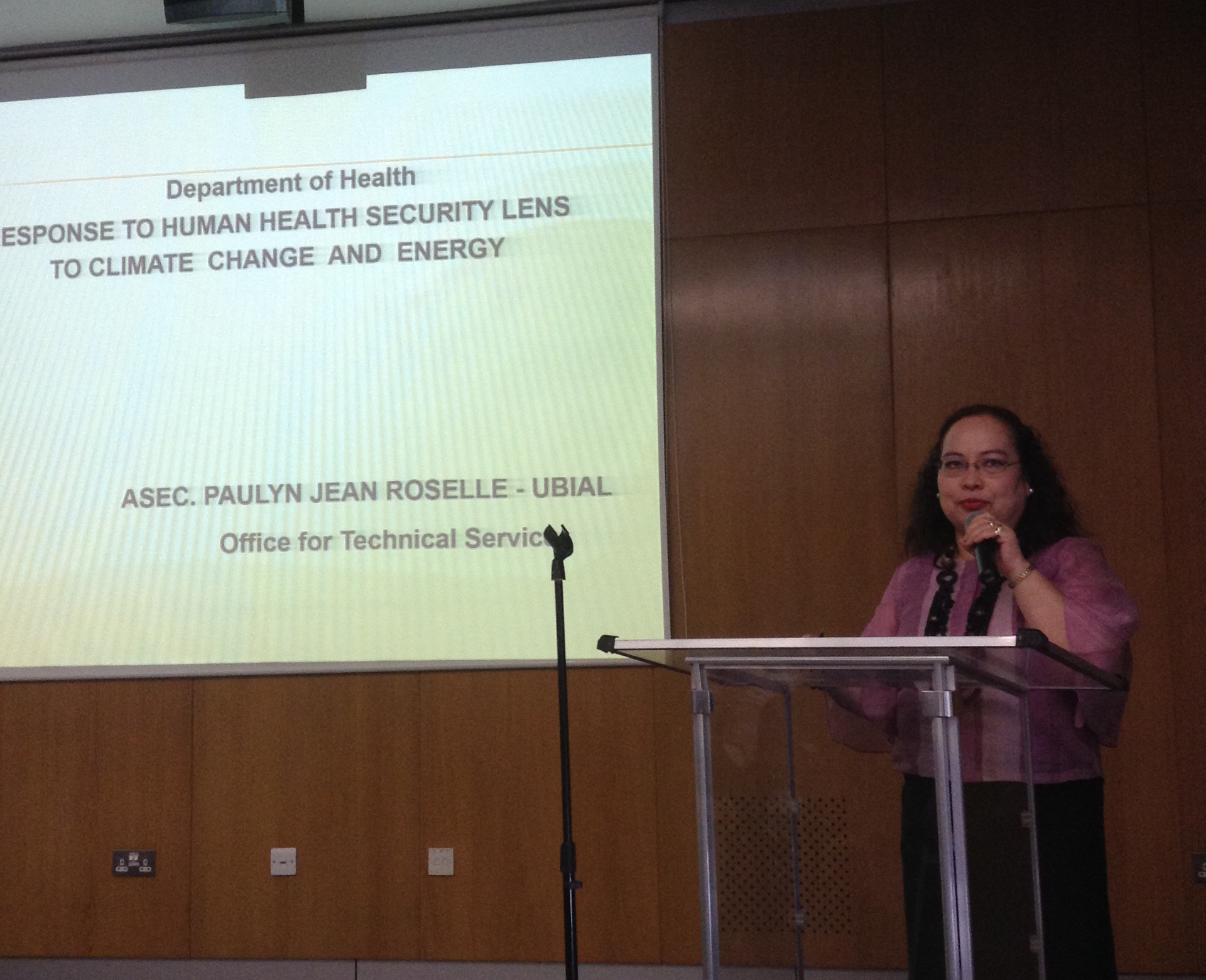 DOH's Asec. commits to strengthen the Department's efforts in addressing the impact of climate change on health

This roundtable led by the British Embassy and the DOH builds on an earlier roundtable discussion on the climate-energy-health nexus organized by HCWH-Asia’s Healthy Energy Initiative last April 10 in partnership with the Oscar M. Lopez Center for Climate Change Adaptation and Disaster Risk Management Foundation, Inc.

Presentations from the roundtable can be accessed here: https://zestybliss.wordpress.com/2015/07/08/opening-the-human-security-lens-to-climate-change-and-energy/