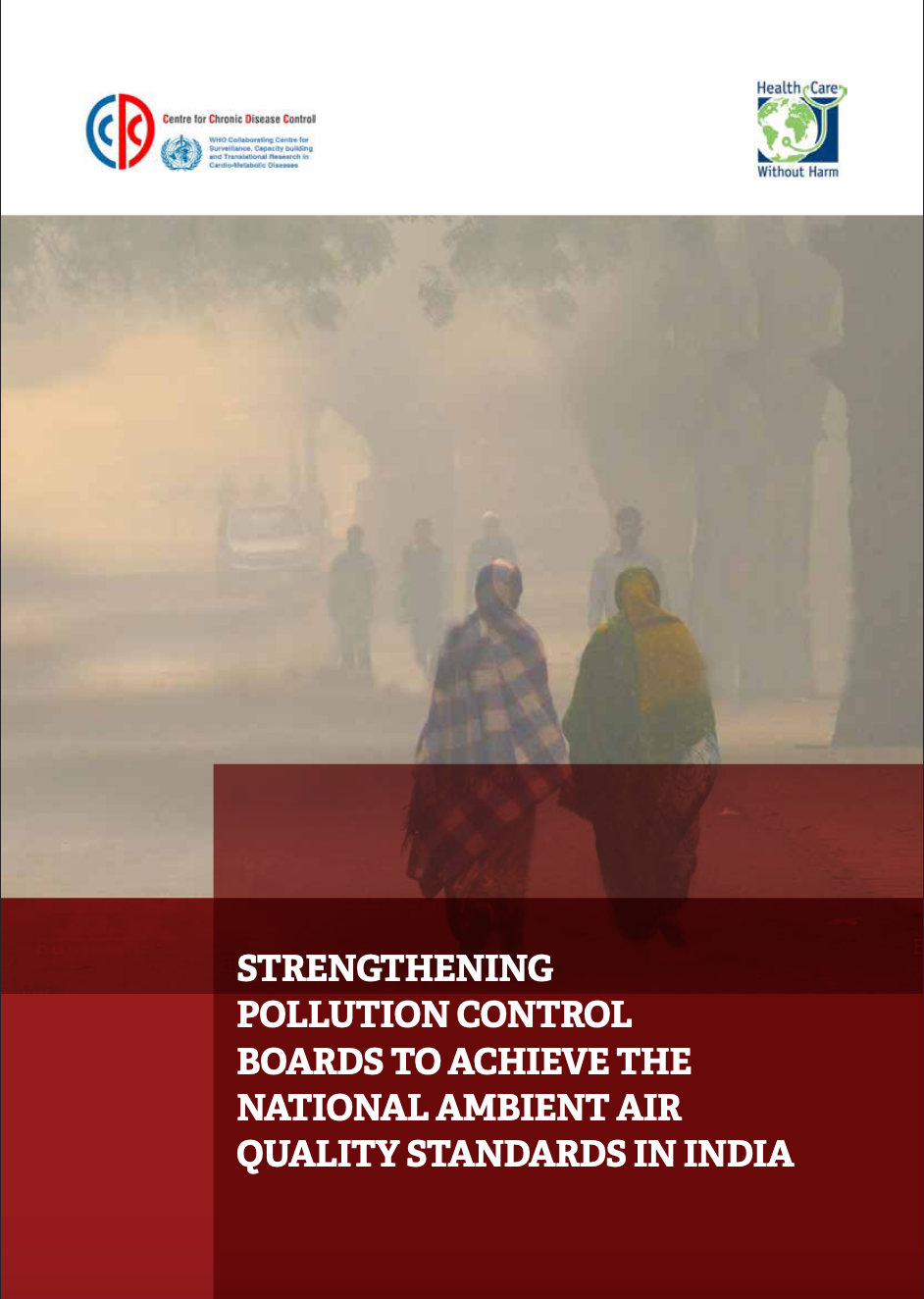 2 November 2020, New Delhi: Delhi-based Centre for Chronic Disease Control (CCDC) released a new study today titled Strengthening Pollution Control Boards to achieve the National Ambient Air Quality Standards in India, which attempts to understand the institutional and informational barriers that are hampering the goal of achieving the National Ambient Air Quality Standards (NAAQS) across the country and provides recommendations to address these gaps. Among other gaps, the study highlights that while the State Pollution Control Boards (SPCBs) have expanded in the scope and scale of their work over the last two decades, their budget and manpower does not match up with the demands.

Primary research for this study was conducted in states across the country in 8 select sample cities which were Lucknow, Patna, Ranchi, Raipur, Bhubaneswar, Vijayawada, Goa and Mumbai. Qualitative in-depth interviews were conducted with members of the Central Pollution Control Board (CPCB) and respective SPCBs, in addition to other stakeholders ranging from bureaucrats, academics, environmentalists, civil society, etc. to gain a holistic perspective.

Dr Poornima Prabhakaran, Head, Environmental Health; Deputy Director, Centre for Environmental Health at Public Health Foundation of India said, “Acute and chronic exposures to air pollution are a leading risk factor for ill health in India, with exposures to Particulate Matter (PM2.5) and Ozone alone contributing to over 1.2 million premature deaths annually. In an effort to establish minimum acceptable levels for ambient air quality, India established its own NAAQS in line with interim targets suggested by the World Health Organization. Since most regions in India fail to meet the much relaxed national air quality standards compared to the more stringent global ones, it is crucial to understand gaps at the ground level of implementation.”

The study reveals several key structural and institutional barriers that are affecting effective implementation of existing regulations, and thereby broader achievement of ambient air quality standards. These include: Institutional capacity – State pollution control boards have seen an expansion in their scope and scale of their work over the last two decades but neither their budgets nor manpower match the demands that they are met with.

Leadership challenges – the leadership of these boards is staffed by civil servants who often lack the domain expertise necessary to effectively deliver on their mandate and are seen primarily as administrative positions. Motivation and accountability – State board officials often have a diminished view of their own role and responsibility. This has shifted their perceived role from that of regulators to technical advisors. Many are also unaware of the full scope of responsibilities accorded to them under existing laws. Multi-sectorality and bureaucracy – The lack of convergence and coordination between various departments at the State and Central level often mean that Pollution Control Board directives aimed at domains under the control of other departments are left unimplemented. The PCBs themselves are also viewed in some states as a bureaucratic hurdle whose only job is to clear files, and not one that is tasked with a vital role in protecting human health.

Monitoring challenges – While air quality monitoring is one of the areas of significant growth over the last decade, PCBs often lack the manpower or expertise to actively maintain and calibrate their instruments. Additionally, monitoring is seen as an end in itself, rather than the basis to initiate action. Understanding of health impacts – The core environmental laws of the country state their raison d’etre as protecting human health, but a poor understanding or misinformation dominate the discourse around the epidemiology of air pollution in PCBs.

Clarifying these misconceptions is essential if the primary goal of this work is to be realized Bhargav Krishna, one of the authors of the report from, Public Health Foundation of India (PHFI) said, “While interventions that strengthen the legislative framework such as the recent ordinance are welcome, they will be as ineffective as previous efforts unless the regulatory bodies that enable their implementation are strengthened with the technical and financial resources needed.

Protecting human health is why we have these laws, and to ensure that this goal is adequately achieved, public health must feature at the core of policymaking moving forward.” The report proposes the following recommendations to address core structural barriers in achieving the NAAQS:
● All Governments rapidly address the acute human resource and leadership needs (e.g.
through training programs, revising pay structures etc.)
● Strengthen centre-state and inter-departmental interactions
● Expand monitoring capacity to effectively use data for compliance and accountability
● Mobilize significant financial resources to invest in PCBs
● Engage health sector stakeholders
● Strengthen the local evidence base

Vidushi Bahuguna from Centre for Chronic Disease Control said, “These actions are essential if the existing legal and regulatory framework for air pollution is to meet its stated goals of improving air quality and protecting human health.”###

About CCDC: Centre for Chronic Disease Control (CCDC) is a New Delhi based not-for-profit organization, established in December 2000. The mission of CCDC is primarily intended to address the growing challenge of chronic diseases, in varied settings of the developing countries through:
→ Knowledge generation, which can inform policies and empower programmes for the prevention and control of chronic diseases

→ Knowledge translation intended to operationalize research results by bridging the critical gaps between relevant research and effective implementation, through analytic work, capacity building, advocacy and development of educational resources for enhancing the empowerment of people and professionals