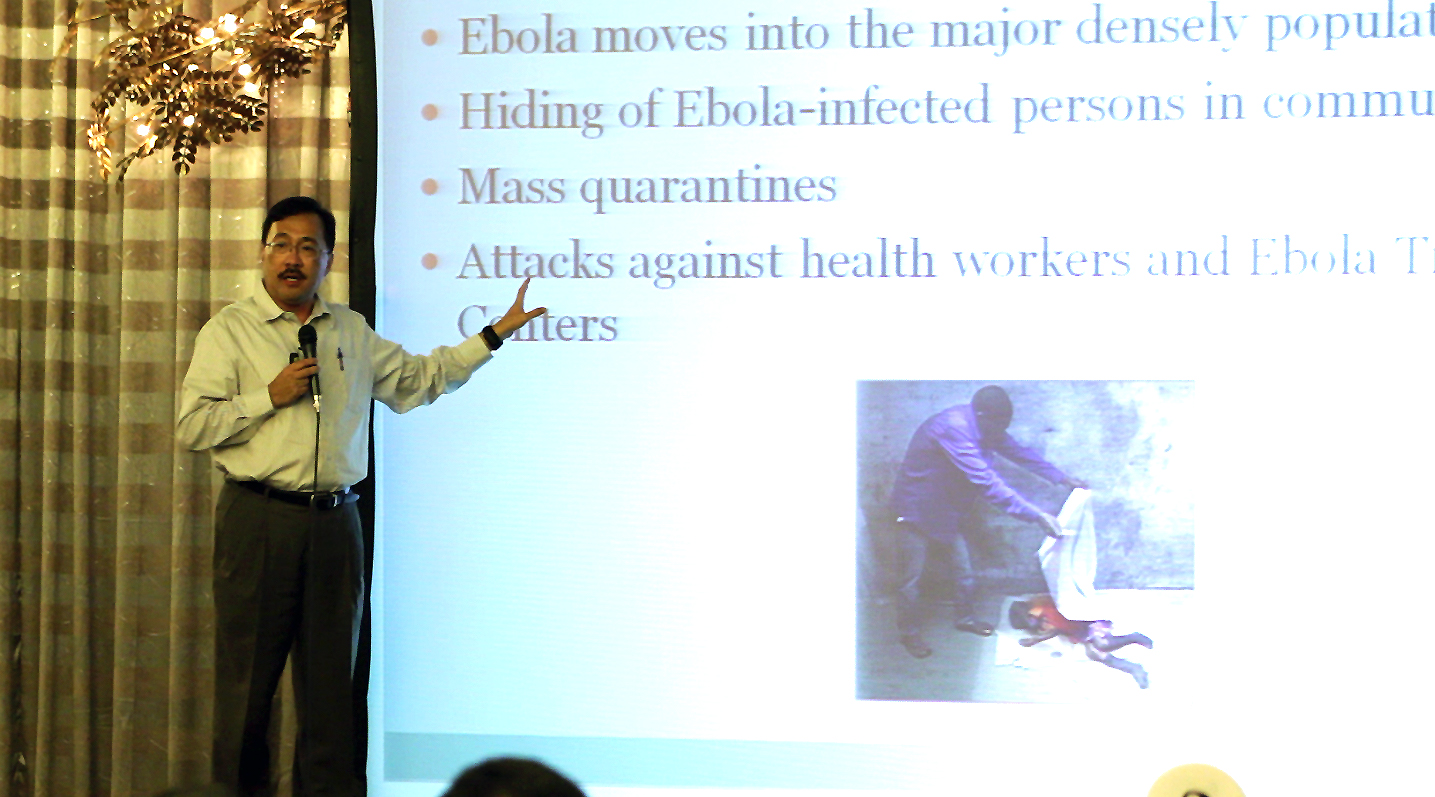 What links the Ebola epidemic to climate change and incineration? For Dr Jorge Emmanuel, the connections are foreboding.

“I’d connect them by means of an important principle called ‘the precautionary principle’. If there is a balance of scientific evidence suggesting a link between an activity and harmful effects, we have to make a decision on the side of protecting public health and the environment,” Dr Emmanuel said, adding that decision-makers play a crucial role in limiting technology or human activities that could pose harm to the environment and public health.

Speaking at a jam-packed public forum on the environmental and health impacts of incineration, the noted environmental scientist explained how various forms of burning could contribute to an increase in global temperatures, potentially causing the melting of glaciers, thereby increasing the level of oceanic waters.

“If we continue to burn coal and burn in incinerators, if we have waste to energy, if we have industrial processes, these will affect the rise of temperature. A 40-inch rise in the sea water level would mean 2.5 million people inundated in Manila at the rate we’re going,” he said.

Organized in line with the Philippines’ first annual celebration of Zero Waste Month, the forum, dubbed “Incineration: Public Health Impact, Climate Change Implications and the Ebola Epidemic”, was sponsored by Health Care Without Harm-Asia (HCWH-Asia) in cooperation with the University of the Philippines-Manila College of Public Health (UPM CPH) and held on January 28 at the Cocoon Boutique Hotel in Quezon City, Philippines.

HCWH-Asia also marked the month-long event with a three-day fair where it featured three member-hospitals of the Global Green Healthy Hospitals (GGHH) in the Philippines. A major campaign of HCWH, GGHH represents more than 9,700 hospitals and health centers from six continents that are committed to reducing their ecological footprint and promoting environmental health.

Engineer Romeo Quizon, dean of the UP-Manila’s College of Public Health, gave the opening remarks to the forum, which was participated in by hospital representatives, the media, the academe, non-government organizations, professional associations, private sector groups and government agencies.

During the forum, Dr Victorino Molina of the Department of Environmental and Occupational Health at UPM CPH echoed the concerns of the academe and proposed the use of alternative technologies, particularly autoclaving. Autoclaving is an environment-friendly high-pressure sterilization method that eliminates bacteria, viruses, fungi, and spores, and is promoted as an alternative to incineration.

According to Dr Molina, there is a need to stand further and look for alternatives in terms of the use of autoclaving and microwaving, another method of sterilizing waste. He said the Philippines is not capable of testing the levels of toxicity in the atmosphere.

Representing the hospital sector, Sister Arcelita Sarnillo, administrator of St Paul De Chartres Health Care Ministry, revealed that a number of hospitals in the country have made strides in achieving environment-friendly practices in hospital waste management.

“What we need to do is achievable,” Sister Sarnillo said.

The hospital administrator reiterated the importance of looking at eco-friendly means of managing waste. She lamented that hospitals do not yet have the capability to monitor the efficiency of incinerators. “An incinerator company wanted to put up incinerators in hospitals in the 1990’s, but environmental groups warned against them. It’s good that these projects were not pursued.”

Meanwhile, Department of Health former Undersecretary Teodoro Herbosa welcomed the observations of health care activists, saying policy-makers also need to focus on the needs of the wider society. He discussed the importance of consistency in the implementation of policies by both government agencies and stakeholders, especially hospital owners.

“Change is not implemented overnight. It needs to be delivered, reinforced and sustained until it has been institutionalized in an organization,” Silvera said.

Despite these hurdles, HCWH-Asia director Merci Ferrer called on concerned groups to remain steadfast in their advocacy.

“We go beyond our profession because it is so important at this time of climate crisis to be a health advocate, ” Ferrer said. HCWH-Asia is part of a global organization that is at the center of transforming the health care sector through anti-incineration advocacy and the promotion of green and healthy hospitals.

Hospitals in the country are banned from using incinerators in medical waste treatment. Section 20 of the Philippine Clean Air Act of 1999 states that incineration is totally prohibited. It is defined as the burning of municipal, biomedical and hazardous waste which emit poisonous and toxic fumes, but excludes from the ban traditional small-scale method of community/neighborhood sanitation siga, traditional, agricultural, cultural health and food preparation and crematoria. One of the provisions of the Clean Air Act is to require the Department of Energy and Natural Resources to promote the use of state-of-the-art, environmentally-sound and safe non-burn technologies for the handling, treatment, thermal destruction, utilization and  disposal of sorted, unrecycled, uncomposted, biomedical  and hazardous wastes.

However, some sectors are looking at incineration as a means to help solve the problem of solid waste management in the Philippines. In fact, former Department of Health secretary Enrique Ona revealed previously that if a case of Ebola would strike the country, the established protocol is to incinerate wastes from the patients and health care providers.

But Dr Emmanuel gave an impassioned appeal against burning medical waste. “One of the lessons learned from the Ebola cases in other countries is that it is an opportunity to improve the health care waste management in general,” Dr Emmanuel said.

There were a recorded 8,296 deaths from 21,296 Ebola cases from Sierra Leone, Liberia and Guinea where incineration was considered the initial solution to treating Ebola-infected wastes. Dr Emmanuel helped establish the non-incineration solution in these countries by designing autoclaves and sharing his expertise through training and mentoring on autoclaving.

“Ebola is destroyed by autoclaving in seconds, “ according to Dr Emmanuel. It also does not produce dioxins, smoke, hypochlorite nor other toxic air pollutants. He has also done a comparison of capital costs that revealed autoclaves are much cheaper than incinerators.

Today, autoclaves are being used in Ebola-stricken countries. Dr Emmanuel believes that the Ebola crisis should not be used to bring back incineration.

Find out more about Dr Emmanuel’s study on Emerging Technologies on Health Care Waste Management and presentations on Incineration, Climate Change and the Ebola Epidemic through

Lessons from the Ebola and the Ebola Waste Crisis