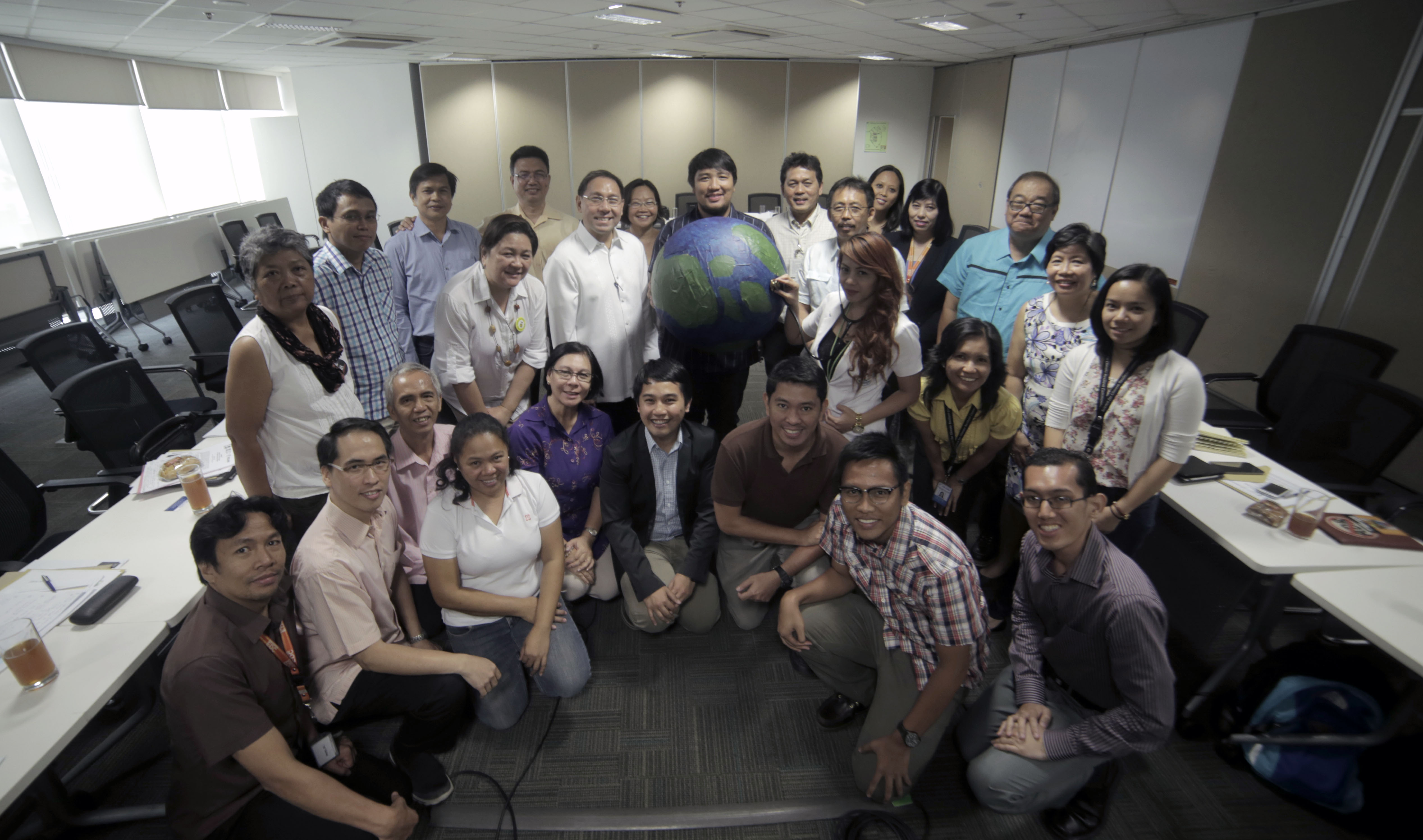 Leaders from the Philippine climate, energy, and health sectors jointly navigate the nexus and build a common agenda

The roundtable discussion aimed to gather leaders from the climate, energy, and health sectors in the Philippines to launch a national conversation and develop a common agenda that links climate resilience, sustainable energy, and health equity. During this inaugural session, participants jointly identified research, policy, and implementation gaps, brainstormed on advocacy and networking strategies, and explored opportunities for building synergies across the three sectors.

Health is central in the climate-energy discourse

In his welcome remarks, Dr. Rodel Lasco, OML Center’s Scientific Director and member of the United Nations Intergovernmental Panel on Climate Change, emphasized the importance of health in the broader climate and energy discourse. He cited a recent WHO report stating that “climate change is expected to cause approximately 250,000 additional deaths per year between 2030 and 2050.”

In 2009 the University College London-Lancet Commission named climate change as “the biggest global health threat of the 21st century,” and in 2014 the British Medical Journal called on the World Health Organization to declare climate change as a “public health emergency.” Also in 2014, IPCC’s Fifth Assessment Report expressed ‘very high confidence’ that the health of human populations is sensitive to changes in weather patterns and other aspects of climate change. Furthermore, while the health impacts of climate change globally are enormous, these will affect the world’s population unevenly, especially the world’s poor.

Dr. Vicente Belizario Jr., DOH’s Undersecretary for Technical Services, welcomed this initiative and asked for “concrete proposals and recommendations” that his office can act upon during the remaining 15 months of President Benigno Aquino III’s administration. He also emphasized that one of the key gaps is building a strong evidence base for the climate-energy-health nexus.

“We need to generate local data to convince policy-makers and develop feasible strategies,” Usec. Belizario exhorted. He expressed that DOH will find ways to support nationally-relevant research that aim to protect health from climate change and energy decisions.

“The health piece has been the missing link in the climate and energy equation,” stated Mario Marasigan, director of DOE’s Renewable Energy Management Bureau. He asked for the help of the health community in pushing forward the campaign for renewable energy in the country.

Dr. Fely Marilyn Lorenzo, a professor of health policy and administration at the UPM-CPH, noted that “the reason why health is often neglected is because it is seen as a downstream effect of what happens in all the other sectors.”

“Therefore, the health sector should look more upstream, since we cannot wait until we already see the negative health outcomes, while the other sectors should begin considering health whenever they make crucial policy decisions,” Dr. Lorenzo said.

What the health sector can do

In his opening presentation, Dr. Renzo Guinto, HCWH-Asia’s Healthy Energy Initiative campaigner, set the scene for the conversation by enumerating the roles of the health sector in the climate-energy nexus.

“For climate adaptation, there are two – to monitor the health impacts of climate change through robust surveillance systems, and to build resilient health systems responsive to these impacts – think our Typhoon Haiyan experience.

“For mitigation, the health sector needs to advocate to other sectors for mitigation measures that have co-benefits to health, such as shifting from coal to clean energy which can help improve air quality to avoid preventable respiratory diseases. However, we also need to reduce our own ecological footprint in order to ‘walk the talk,’” Dr. Guinto stated.

Nurse Nilda Silvera, NLPGNI president, also emphasized that need to involve all health professionals, including nurses. “In fact, nurses can lead this movement. We are the ones who first interact with patients as they enter the hospital or the clinic. We are the ones responsible for waste management, handling of chemicals, ensuring food safety, purchasing of materials – in short, the day-to-day operations of the health system.”

Because the nexus requires actions not just from the health community but also from other sectors, Dr. Guinto hopes that this new movement will launch “a new cadre of health professionals and citizens in general who think systems and not silos, embrace intersectoriality and transdisciplinary approaches, and commit to address these complex and seemingly-insurmountable challenges.”

Dr. Guinto then referred to the “Health in All Policies” approach being currently promoted by WHO as a useful framework for addressing the climate-energy-health nexus, and called for the adoption of health impact assessments in the evaluation of energy projects. “What we need today is a C.H.E.A.P. solution – Climate, Health, and Equity in All Policies!” said Guinto. 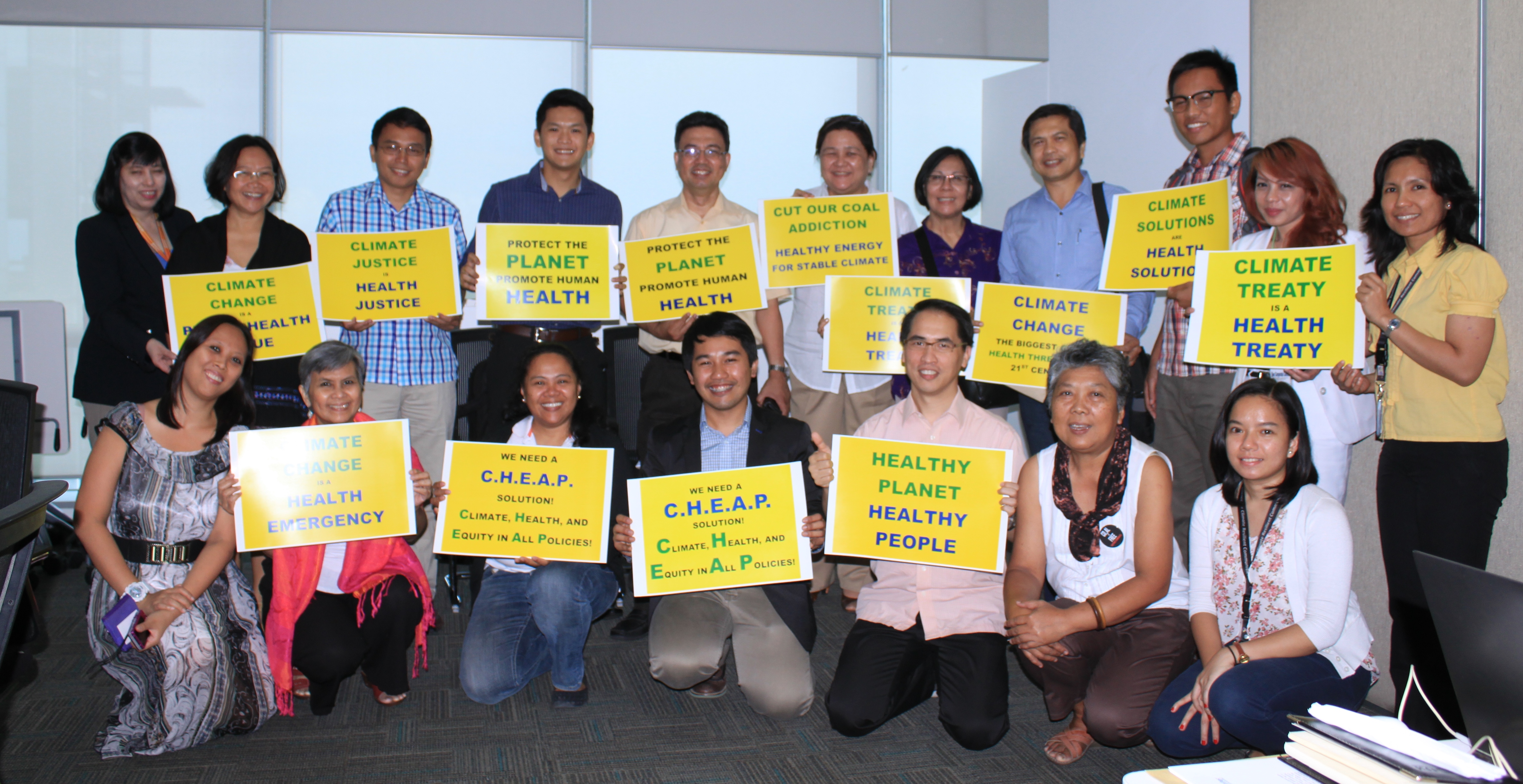 Coal as the ‘new tobacco’

Dr. Ulysses Dorotheo, chairman of PMA’s Environmental Health and Ecology Committee, observed that coal-fired power plants and other fossil fuels may now be the “new tobacco,” and the movement can therefore learn from the lessons of anti-tobacco advocacy.

“The coal industry actually learned a lot of their tactics from the tobacco industry,” said Dr. Dorotheo. “An intersectoral approach is needed. In our anti-tobacco campaign, we worked with a wide range of sectors such as the Department of Finance, lawyers, farmers, patient groups, among others.”

The fossil fuel divestment movement within the health sector has recently started, beginning with the British Medical Association’s removal of its investments from coal and other fossil fuels last year. At the World Congress on Public Health last February in India, the World Federation of Public Health Associations endorsed the Kolkata Call to Action, which advocated for “a rapid phase out of coal for electricity production and greater investment in renewable energy technologies as a significant investment in global health and healthy communities” and urged national public health associations to “divest from any assets held… that include investment in fossil fuel projects or infrastructure.”

Last March, the British newspaper the Guardian also launched a campaign calling for the Bill and Melinda Gates Foundation and Wellcome Trust, two of the biggest funders of global health research, to divest from top fossil fuel companies with the largest reserves on the grounds that they undermine the charities’ health initiatives.

A priority global and local agenda

Dr. Mohd Nasir Hassan, Coordinator of Health and Environment at the WHO Western Pacific Regional Office, noted the timeliness and relevance of the roundtable. “Climate change is now a top global health priority of WHO,” mentioned Dr. Hassan, citing the WHO Conference on Health and Climate held last year in Geneva which aimed to raise the profile of health in the global climate agenda.

Even US President Barrack Obama himself declared last week that climate change is a hazard to the health of Americans. Governments, organizations, and other stakeholders are now recognizing the health dimensions of climate change and are calling for its rebranding as a public health issue.

“Let us not forget that the climate, energy, and health agenda is, first and foremost, an issue of equity,” reminded Gerry Arances, PMCJ national coordinator. “The coal-fired power plants that continue to be constructed in the Philippines and in other countries are built for favored industries and corporations. And who bears the brunt? The poor, the vulnerable, the marginalized.”

Arances also shared about the major impediments in the two-decade-long negotiations of the United Nations Framework Convention on Climate Change, which will have its final round this December in Paris. “The fossil fuel industry is one of the biggest drivers of climate change, and is the one blocking the achievement of an ambitious treaty that will protect both the climate and human health.”

“The health voice needs to be heard, not just in Paris, but also in the meetings and mobilizations that will happen before that,” stated Merci Ferrer, HCWH-Asia’s Director. HCWH is a founding member of the Global Climate and Health Alliance, a network of health organizations from around the world working towards tackling climate change and promoting public health.

Community organizer Veronica Cabe, who is the coordinator of Coal Free Mariveles Movement, reminded the roundtable not to forget about the local communities who suffer the most from climate change and energy policy decisions.

“The communities affected by coal-fired power plants can be effective allies, for example, in research through community monitoring,” Cabe said. “We need to build their capacity, and I am optimistic because there is a lot of expertise coming from the different stakeholders in this room.”

Erica Tania Davillo, External Vice President of AMSA-Philippines, also called on the body to involve the students and youth. “Our medical students today are very aware of climate change, and there is a high level of energy and enthusiasm among students who want to be involved in research, education, and advocacy,” she said.

The event is part of a series of activities to build momentum for HCWH-Asia’s Healthy Energy Initiative, which aims to mobilize the health sector to play a central role in advocating for a move away from fossil fuel-based power generation—particularly coal—and toward clean, renewable healthy energy options. At present, the Initiative is comprised of a network of health professionals, health organizations, and academic research institutions from five countries – Australia, China, India, Philippines, and South Africa – and the European region.

A report summarizing the roundtable discussion’s key messages and recommendations will soon be released. The event’s concept note can be downloaded here.