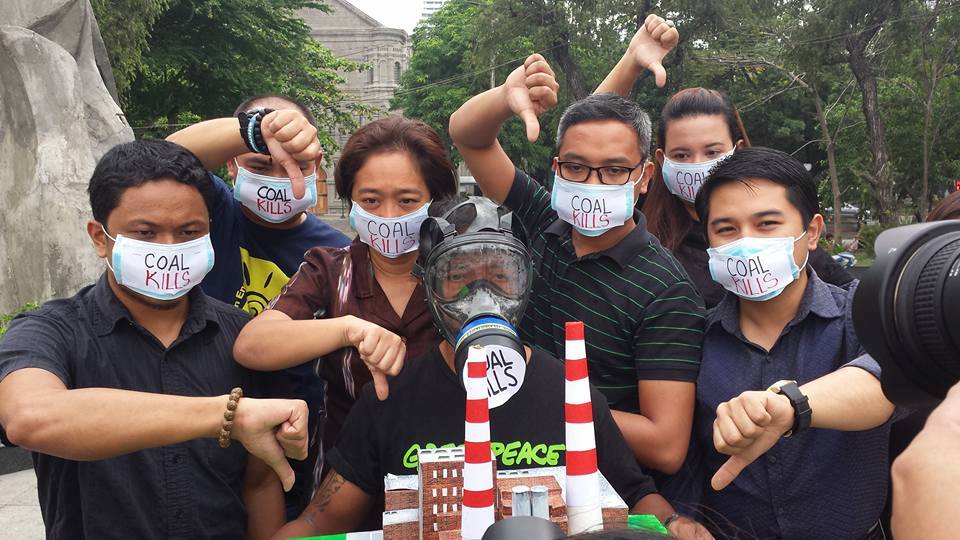 Last February 3, 2016, we Health Care Without Harm-Asia, through our Healthy Energy Initiative, joined Greenpeace and other partner organizations in launching the report entitled “Coal: A Public Health Crisis. Diseases and deaths attributed to coal use in the Philippines.” This Greenpeace-commissioned study conducted by Harvard University revealed that currently, there are roughly 960 deaths annually due to existing coal-fired power plants, which may increase up to 2,410 once the 29 proposed coal plants become operational.

In many ways, this study is very timely and relevant. People always think that health is important, but the health dimension of our energy choices rarely makes it to the headlines. Now, this landmark report has caught tremendous attention, as it is the first time that a numerical figure was pegged to estimate the health damage caused by dirty coal in the country. Incidentally, this report was launched a few weeks after President Aquino has inaugurated a new coal-fired power plant in Davao City, which was also a few weeks after he gave a flowery speech about leading the fight against climate change in Paris last December.

Nonetheless, this research is a welcome addition to the dearth of locally performed studies on the health effects of coal among Filipinos. However, it is important to also note that this study just confirms what we already know about coal’s grave impacts on human health based on international evidence. Lack of local studies should not be used as an excuse for inaction.

While 2,410 may be way less than those reported in other countries, say India (80,000 to 150,000) and the United States (13,200), it is vital to note that this value is a conservative estimate. It means that the model being used to come up with the projections, while already sophisticated enough with the given data and resources, still has limitations. For instance, not all diseases attributed to coal plant emissions were included in the projections, simply because some conditions – such as premature births and neurological diseases – are much harder to count and track. Cancers too were not measured, as they take many years to develop or manifest – sometimes not in the current generation, but in those yet to come. In this study, only heart and lung conditions such as heart attack, stroke and lung cancer were estimated.

There are other assumptions as well – that the population being studied does not move or increase; that the environmental conditions are static (by the way, we do not even regularly monitor air quality in communities hosting coal plants – and that is a huge data gap for studies such as this); that our environmental laws, level of enforcement, and the entire social fabric are the same as those in the United States from where the model originated. Imagine if the actual conditions here in the Philippines were taken into account – the number would have been much, much bigger. I also wonder how much will this mean in peso, or maybe PhilHealth spending, but valuing life in monetary terms will be a more challenging, if not controversial, exercise.

Nevertheless, no matter how small the number appears, we cannot be complacent with 2,410 premature deaths, because surely the actual, larger number may be invisible to statistical models but clearly visible to the communities suffering from coal’s menace. Let me also emphasize the word “premature” – that means 2,410 real people whose lives will be cut short unnecessarily and dreams and potentials never to be realized.

The worst thing is, these 2,410 people live – or struggle – at the margins of society, perhaps in communities with very weak local health systems and exposed to scandalous poverty and degradation. Indeed, the health impacts of coal are unfairly distributed in society, disproportionately affecting the poor and the marginalized. And finally, these Filipinos – all 2,410 of them – got human rights too, including the right to health. This right is supposed to be inalienable, but every time we burn a ton of coal, this right is being stripped away from them.

Clearly, coal has not just produced the biggest climate crisis humanity has ever faced – and is still struggling to combat every single day in ways big and small. Our societal addiction to coal has also resulted in a public health crisis that kills people’s lives, widens the health divide, and curtails human rights. Such is the human face of the climate crisis and the human cost of coal. My fervent hope is that this time, the public health argument will convince us, especially our leaders, that coal is not the way to go towards a clean, sustainable and healthy energy future that we all dutifully demand and deeply deserve.

Dr. Renzo Guinto is the Campaigner for the Healthy Energy Initiative of Health Care Without Harm-Asia. He is a member of the editorial board of this report published by Greenpeace Philippines.